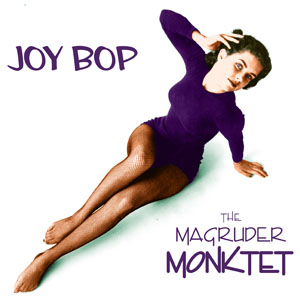 We are so excited! At last…and finally…”Joy Bop”, the Magruder Monktet’s brand new CD…is here!!!
This album was recorded “live” at Studio Magruder last Summer and represents the pride, love, imagination and daring of everyone involved.
Under the leadership of Joy Magruder, the Monktet is a straight-ahead little big band (nonet) which plays the music of Thelonious Monk as well as John Magruder’s original pieces arranged in the Monk Mode.

2. One of John’s all time favorite Monk tunes, “Ruby My Dear”, was his first arrangement especially for the Monktet. It features heartbreaking solos by Bill Fulton (piano) and Roy Wiegand III (trpt.)

3. In order to expand the Monktet Book, Joy asked Bill Fulton to arrange “Who Said That” from the 18 piece Magruder Big Band original. This piece has become known as “the strip number” for reasons that will become immediately apparent.

4. The story of “Wallflower” begins with the title. It was arranged from John’s Big Band chart by Phil Moore who re-created this tale of lament and hope in the style of a great storyteller.

5. The title of the delightful “Trite Me Twinks” came from John’s vivid imagination and remains a mystery to the rest of us, including Joy. It is written in a swingin’ 5/4 time which usually ruffles a few feathers.

6. Phil Moore re-imagined Monk’s “Misterioso” as a creative musical flight…using themes of darkness, complexity and some of the most outrageous of Thelonious’ ideas.{mp3}Misterioso{/mp3}

7. The Magruder composition, “Bottom Step” is a fast tour de force which keeps both players and listeners on their toes.

8. “’Round Midnight”, probably Monk’s best known tune, was arranged by John and features the incredible Phil Moore on Baritone Sax and Bass Clarinet. As the story goes…during an especially dramatic performance of his solo…Phil was so totally involved…that he almost passed out!

9. “Blue Joy” is not the real title…but it has always been what we used in public. Big Announcement: the real title is… “Blue Job”! According to John, this composition defines what true BeBop is all about.{mp3}Blue Job{/mp3}

10. The Monk tune, “Rhythm-A-Ning” contains the only vocal in the book. It wasn’t in John’s original arrangement but the players decided to sing, instead of play, the background parts to the solos…during one rehearsal…and it stuck! Try to sing along.

11. “Night Song” is a beautiful ballad. This love song was composed by John with Kevin Hiatt and arranged by Bill Fulton for the Monktet. It will tug at your heart strings.

We hope that you will enjoy our music as much as we enjoyed making it.

The Magruder Monktet is available for appearances at jazz festivals, clubs, educational presentations and other venues.